When the Children Become the Parents

on August 22, 2018
A few years ago the family started to notice that my grandmother (here-to-for known as “Mother” or “Mom”) was forgetting… words. It was that “searching for nouns” as we liked to call it. “What’s that thing…oh I can’t think of the name…you know… ” and then she’d pantomime opening a banana.

Actually this was farther into it – the not remembering a banana was a banana. What’s upsetting wasn't that she couldn't remember the word banana, but the worries behind why she no longer remembered the word “banana.” And why the HECK can’t she remember banana?! Where is the mind wandering? Where is it going and how fast? How long do we have…? 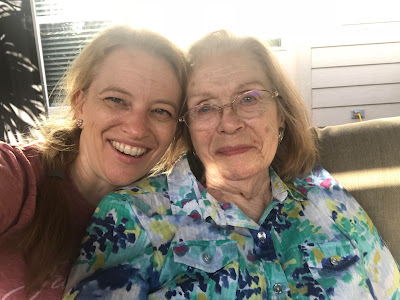 Mother is the über mother. She had her nose in our business all our lives. A real southern matriarch. She wasn’t easy. But she’s our mother. She was married twice. She divorced my grandfather (here-to-fore “Dad”) when I was only about 2, the youngest of 5, and remarried my stepfather. Dad passed away when I was 15, and my stepfather, in 2007. Once he passed Mom slowed way the heck down. We moved her to be closer to the family and she lived alone for a good while, about 6 years until my mother (sheesh – here-to-fore “Annie” – read the Hushabye blog to understand the confusion) moved in with her for a while.

Unfortunately, Mom didn’t turn out to be the kind of elderly person that has that get up and go, takes painting classes or signs up for some geriatric online dating service. No. She is the kind that sits and watches TV, goes out with one of the family for dinner or to get her nails done. Not much more than that. And time takes a hefty toll on that. You could beg and plead with her, you could reason and cajole and try to inspire.

Nope. She’d made her decision. Just make sure the channels don’t have commercials.

But now I wonder if the decline in her memory was part of this equation. Maybe her brain -  shrinking - was what made it hard for her to read or want to paint. (She did use to paint a lot.) Maybe that’s what Alzheimer’s does. It’s a creeper.

I didn’t want to believe it. I just wanted to think she’s no different than anybody aging. Only I have known 98 year old whippersnappers that could put my brain to shame so no. It must have been that Dementia beginning. My great-grandmother, her mother, had “Dementia”. They never called it Alzheimer’s. Maybe they weren’t calling it then or they hadn't actually tested her for that type of Dementia. But she’d have a piece of paper beside her bed with the names of all of her children and grandchildren. I’ll never forget the time her great grandson, only 8 at the time, walked in and she asked “Who’s that?” Oh, the pained and surprised look on his face. The disappointment. No one had warned him but no one really had caught up with it. It seemed to be always ahead of us. 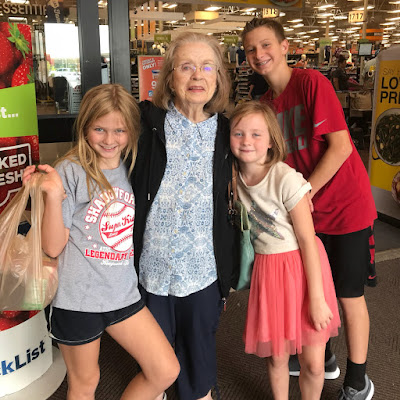 I told my nieces and nephews that story. They are around that age now. I warned and prepared them. I said it may not happen but if it does remember this moment. And remember it’s not because you aren’t memorable! Honestly, I can’t imagine anyone not taking something like that personally. Because, after all, it’s immensely personal, isn’t it.

Mom isn’t there yet. Quite. There are a few distant cousins that are fading in the wind. But once we remind her it seems to jog. Or is she just bluffing? She can be a cagey one.

About 3 years ago the sibs got together for a family chat to discuss how to proceed with Mom. Because Annie was already, as primary care taker, beyond lost in her “tired”. We made the rotten decision to move mom into an elderly care facility. We were going to move forward and work it all out. Hard decision. But the right one. Only a rotten decision because having to do that stinks to the core.

But nothing happened. Yep that’s my family for ya. Great follow through! No one did a thing. We simply couldn’t. Even Annie. So for 2 more years we stuck with the status quo. But then Mom’s decline in memory hastened, Annie was beyond burnt, and we began to worry for Mom’s (not to mention Annie’s) physical safety. Mom had begun “shuffling”. If she should fall, Annie wouldn’t be able to lift her. And Mom had by this time received an official diagnosis.

So the hunt began for the new facility. One where the care givers were pros in the field of Alzheimer’s care.

And Mom, even though the doctors said she was “moderate to severe”… 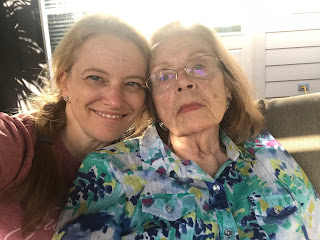 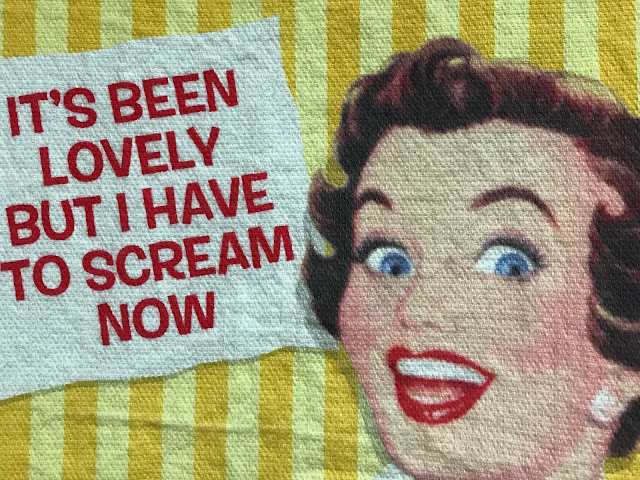 It's Been Lovely But I Have to Scream Now

I grew up in a household with all the “feels” in tact and firing rapidly. A lot of ups and downs. Draaaammmmaa dahlink.  This was intensified by alcohol. The Daily Drink. Drama and alcohol; a not necessarily surprising combo. Though I’ve heard tell of joy and alcohol as well. Every hear of the happy drunk? Sounds like a really funny guy. Mom is and was a really funny gal. Witty and urbane. When she was sober. But I’m not talking about sober. “Not sober Mom" was full steam Tosca on a Wednesday matinée. Every day was Wednesday. These descriptors wouldn’t be complete without the chasers of shame and hiding. Shaken not stirred. I mean that would be a disappointing drink without those two essentials. There were also two kinds of secrets. 1.) Big stupid secrets and  2.) Little stupid secrets. So yes, there were a lot of feels. The problem with all those feels isn’t the feels themselves. The problem is the mistaken summation that you have to hide the feels from the world. Ex 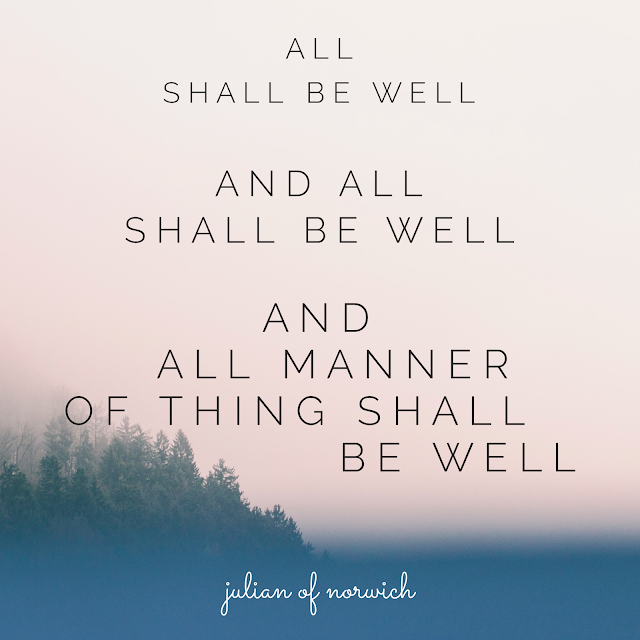 When You Must Go Where You do not Want to Go

Here I go. A sort of unexpected trip home. I was planning for Christmas. God was planning for now. I was currently on a trip. So my family didn't tell until I came home that Mom -- well I should come home sooner. When they don't tell you because you are having a good time on a trip. Let that sit for a second. So I pray in front of Expedia on my desktop. "Lord, when?" Now. Did I hear that right? Was that real? Or just ... me? Now like... now now? Or now like it'll be okay in a couple of weeks now? I'll try one more time. "Lord..." Now. Now costs a minimum of 736.00 and the airlines care not for these kinds of emergencies. And it's the holidays and crowds and ... the world. Now. I'm leaving Friday. Dave Ramsey will have to understand. This is why I'm supposed to have that emergency fund. Sigh. I pray more. I cry. Don't know what to expect. Mom is up and down in and around. The more and more I think on that one 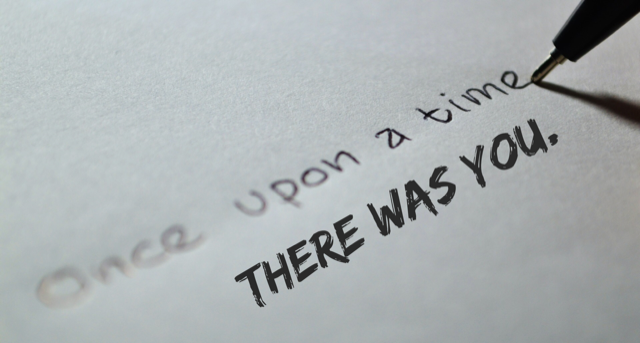 Why You Need to Own and Share Your Story

Why do you need to tell your story? Aside from the “because I have a right to tell it and to be heard.” Because you, after a season of anguish or exhultation, must exhort, share, so that others will be prepared for the time when they experience an altogether different though similar story that is uniquely designed for them but could possibly have their suffering eased, if but a tiny bit, because they know they are not alone on this earthly realm. Because of you. Because of a story they heard once about you. You. Who went through “it” too. Because you spoke up. Because you let it all hang out. High or low. Sharing stories give us a running chance at handling, wrestling with, pulling through, dodging, slogging, or even waiting until we catch up to the present where the story will allow us to move (sometimes forward) again. Some folks suffer when they don’t share their experience, thoughts, intuitive glimmers and holy accounts and feel will implode if all is held within. Som